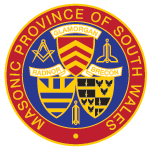 The Lodge was formed by Brethren who were former pupils or “Old Boys” of Cardiff High School for Boys.  The Petition was signed by the Master of Howardian Lodge No.5317 our sponsoring Lodge, on the 13th February 1939, with 22 supporting Brethren’s signatures, also together with that of the Provincial Grand Master R.W.Bro. R.P. St. John Charles.  And a Warrant issued by United Grand Lodge on the 2nd March 1939.

The Lodge, thus designated a “Schools Lodge”, was Consecrated at the Cardiff Masonic Hall on 15th May 1939 by the Deputy Provincial Grand Master, V.W.Bro. Edgar J. Rutter, the Provincial Grand Master, R. P. St. John Charles being unable to attend owing to illness.  V.W.Bro. Rutter later became a Joining Member and served as Lodge Secretary from 1946 to 1952 when he became Master of the Lodge.  His two sons, Frank William Eden Rutter and John Clevedon Rutter, both Initiates, served as Masters during 1948 and 1949 respectively.

Harlequins Lodge No.5793 was named after the then Cardiff High School playing fields located on the North side of Newport Road, called “The Harlequins Ground”.  Lord Tredegar demanded a peppercorn rent in 1902, to ensure that a contract existed for its continued use.  Lord Tredegar, who as a young ensign had ridden in the “Charge of the Light Brigade”, had close ties with the school, with a school “House” being named after him. 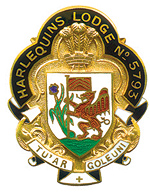 The Lodge Crest derives from the Old Boys’ Association blazer badge, and consists mainly of the old Cardiff Coat of Arms, plus the Prince of Wales feathers, the daffodil, and a Welsh Dragon rampant bearing the old City Standard.  The school motto ‘Tu’ar Goleuni’ – “Towards the Light”, was also part of the Old Boys’ badge.  The Lodge crest forms part of the Lodge’s ‘Past Masters Jewel’, which is presented to all Masters once they have installed their successor, as recognition of their year in office.

At different times we have had Headmasters of Howardian and Cardiff High Schools, a Deputy Headmaster of Whitchurch High School, and other Grammar School teachers as Members.  Bro Dennis Glyn Jones, a teacher at Cardiff High School was also a National Welsh Hockey Selector; though not at the same time that W.Bro. Wilfred Pallot was a member of the 1908 Welsh Olympic Hockey Team!

On the 14 January 1974, influenced by the national changes to Secondary Education and the introduction of Comprehensive Schooling by Cardiff City Council, the Lodge Members discussed the viability of the Lodge’s future in the light of the closing of the Grammar School.  Although a fight to have the name of the school continued in its Comprehensive replacement was successful, Masonic association with the new school was dubious, and it was decided that henceforth, membership of the Lodge should not be restricted to “Old Boys” of Cardiff High School.

‘The Banner comprises a Classical Harlequin standing on a black and white squared pavement with the Lodge name and number in a scroll across the top of the Banner’.  It was designed and produced by Mrs Carol Abraham, daughter of a Past Master W.Bro. Fred Fox.

Among our treasured possessions is our “Lodge Silver” which is brought out at each Installation Festive Board and on special occasions.

As one of the foremost members of the national Federation of School Lodges, it is of interest to note that the Federation was first mooted in 1947, and its first Annual General Meeting held in 1949.  At that meeting V.W.Bro. Edgar J. Rutter the Deputy Provincial Grand Master of our Province was elected as its First President.  It was on 27th September 1958 that the Lodge first hosted what was the 11th Annual Festival of the Federation of School Lodges, with the assistance of Howardian (No.5317), Old Barrians (No.6671), and Old Goreans (No.7193) Lodges.  W.Bro. Rev W E Mathias-Williams, then Provincial Senior Grand Warden, of the then South Wales ‘Eastern Division’, delivered an address entitled “Education and Freemasonry”.  This address was considered very apposite to the Federation of School Lodges.  Our “Schools Night” is in January each year at which Members of other School Lodges are invited to be present.  The Festive Board is an opportunity to renew old School rivalries, and woe betide any Officer whose performance during the Ceremony is not up to the mark!

Schools Lodges regularly invited and visited are:- The Robert Thorne Lodge No.3663 (Bristol), Nioba Lodge No.5264 (Newport, Mon.), Old Barrians Lodge No.6671, (Barry) Old Goreans Lodge No.7193, (Swansea), Llangattock/Howardian Lodge No.2547, Ymlaen Lodge No.8419, and Old Monktonians Lodge No.8938 (Cardiff).  We were recently instrumental in obtaining Associate Membership of the Federation of School Lodges for the Edgar J. Rutter Lodge (7196) due to the debt owed to V.W.Bro. Edgar J. Rutter, in its foundation.

On 5th September 1998 the Lodge was delighted to host the 51st School Lodge Festival, this time with the assistance of Old Cantonians (now merged with Ymlaen) and Old Monktonians Lodges.  V.W.Bro. Peter Frost, the Deputy Provincial Grand Master, represented the Province.  An address “Freemasonry in Hungary” was delivered before 260 Brethren from sixty-five Lodges, by W.Bro. Naunton Liles and Bro Andrew Hollo-Tas, (himself of Hungarian nationality).  Then 237 dined at Cardiff County Hall and after the Festival a cheque for £500 was presented to Bro Hollo-Tas to be donated to the Symbolic Grand Lodge of Hungary’s Widows. 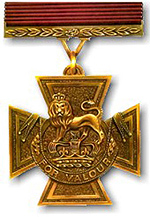 On 13th November 2006 the Lodge was privileged to host an Official Delivery of the Prestonian Lecture, the Lecturer for 2006 being delivered by W.Bro. Granville S. Angell, MEd, BSc, BA, whose topic was “The Victoria Cross – Freemasons’ Band of Brothers”.

The Charity that benefited from the £1,440 proceeds of the evening was “VC Grave Concern” which looks after the restoration and maintenance of any neglected graves of the holder of the VC who were Freemasons.  Many Honoured Guests were present,  R.W.Bro. Hywel Davies, Provincial Grand Master, V.W.Bro. Peter Frost, PGSwdB, DepProvGM, W.Bro. Rev. Norman Lea, PDepGChap,all the AsstPGM’s and a Full Provincial Escort Team.  Holy Royal Arch was represented by V.W.Bro John Taylor, MEGS.  Also present were the President of National Masonic Samaritans Fund R.W.Bro. Norman Lloyd-Edwards, KCVO, GCStJ, RD*, RNR, PGJW; V.W.Bro. Graham Rees, PGSwdB, PDepP.G.M (Mon), and the Chairman of the Lodge Organising Committee W.Bro. John I. Davies, CBE, PAGDC.  All the Schools Lodge Masters were in attendance. Representing the Federation of Schools Lodges, were our own W.Bro. Fred Fox, Chairman; W.Bro. Peter Whittingham, IPC, W.Bro. E.D. Humphries and W.Bro. H.S. Craig, (Joint Secretaries) plus 185 members from 67 different Lodges in the Province of South Wales.

We are extremely proud to mention our Daughter Lodges.

Firstly, Observer Lodge No.6015 which was Consecrated on 11 January 1945, its name being quite unique in Freemasonry, being the only one of its kind in the world.  Special Dispensation had to be obtained from Grand Lodge to use the name.  The Brethren who belonged to No.25 Observer Corps, which later became the Royal Observer Corps, founded the Lodge.  The Lodge was the brainchild of W.Bro. Harry Stockwell, the ProvGSec at the time and he was the first Master.  Sadly their ‘warrant’ was returned to Grand Lodge in 2014.

Secondly, Llanfair Lodge No.7353 comprising Masons who were members of Glamorgan Wanderers Rugby Football Club.  It was Consecrated on 28th September 1954, and on this occasion Harlequins No.5793 and Prince Llewellyn No.2570 were Joint Sponsors to the new Lodge.  Harlequins provided a Consecrating Officer in W.Bro. Vivien Care, ProvDepGDC, as ADC and a Founding Member in Bro. E.J. Joseph Evans, and a Joining member W.Bro. Trevor B. Phillips.

Distinguished Brethren of the Lodge

R.W.Bro. Edgar John Rutter DepPGM (WM 1952), went to Howard Gardens School, and subsequently became the First W.M. of Howardian, (1931). He had two sons whom he sent to Cardiff High School, and was instrumental in forming the Harlequins Lodge (presumably for them to join !).  He became Secretary in May 1944 and was W.M. in 1952.  His son’s Frank W.E. Rutter (WM 1948) and John C. Rutter (WM 1949) were both initiated into the Lodge, and subsequently became distinguished in their chosen Professions.

The elder; – W.Bro. Dr Frank William Eden Rutter PPrGW, studied Medicine at Westminster Hospital in London and later joined the Royal Army Medical Corps in WW II and was present at the D-Day landings in France, maintaining a front-line field medical service for casualties. (Source: New Zealand Herald – Obituary 2 November 2002).  He emigrated to New Zealand in 1963, his journey was interrupted when the liner Canberra, in which he was travelling with his wife Mary, six daughters, two dogs and a cat, caught fire in the Mediterranean and they completed their journey by air.  He became a GP in Papatoetoe now a suburb of Auckland, but interested himself in the wider applications of the Profession and was elected Chairman of the Auckland Hospital Board in 1974.  He was responsible for the establishment of a “Super-Clinic” in South Auckland.  He was widely considered as an astute politician and a man of remarkably wide and varied interests (including dog-breeding and flying).  He was made a CBE in 1981, and was knighted in 1986 for his services to Hospital Boards.

The younger; – W.Bro. H.H. Judge John Clevedon Rutter, PPrGW, PGD, was well known to Masons in this and other Provinces not only for his services to the Legal Profession and Freemasonry, but as an after-dinner speaker par-excellence.  So far as can be traced, he is the only Mason who has not had his health proposed as an Initiate (2nd January 1941), the Festive Board being “abruptly” terminated by “enemy action”.  Early in WWII he served with a gun battery in Cardiff before being sent overseas, where he became a prisoner of war of the Japanese, 1942-45.  He was a Founder of Grand Design Lodge, (renamed the Edgar Rutter Lodge No 7196), and later became Master in 1966.  He was a Founder and first IPM of the South Wales Jurists’ Lodge No 7092 in 1951.  He was a Member of Hendre Lodge No 3250, where he served as Junior Warden, and a Member of Apollo University (Oxford) Lodge No 357, where he was a serving Officer whilst in residence.  He was an Honorary Member of Aelwyd Lodge No7982, at which he assisted as a Consecrating Officer. W.Bro. H.H. Judge John served as ProvGStwd in 1955, PPrGD, in 1956 and ProvSGW in 1963. 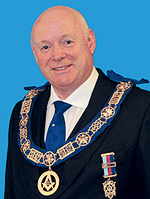 R.W.Bro. Gareth Jones, OBE, PGM, R.W.Bro. Gareth, played rugby for Cardiff HSOB RFC; hence his link with Harlequins Lodge and was initiated on the 13th February 1984 (our 100th initiate) and, after serving in all the Offices, was installed into the Chair in May 1993. 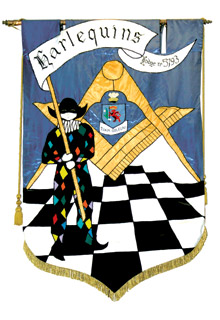